From the Montgomery Advertiser
Reviews by Allan Swafford

June 5, 1999
"Prelude to a Kiss," the Craig Lucas play that just opened in an a theatre production at Theatre AUM, is gender confusion engendering genre confusion.  The production recommends itself in terms of smooth direction and some talented new faces in the cast. ....... Returning to the stage that nurtured her, Christine Lee is Rita, the young bride whose soul is stolen.  She is particularly adept at handling the unusual personality shifts required by this character.  ..... 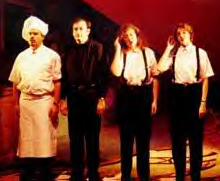 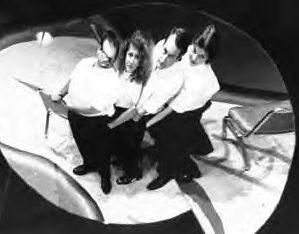 Nov. 13, 1999
Now playing at Theatre AUM, David Ives' extraordinarily individual, impressively inventive "All in the Timing" is as rewarding an 80 minutes as a theatergoer can give himself.  These six brilliant, satiric skits search for and find a play rather than begin as one..........."All in the Timing" is a work aimed at the theater sophisticate, at the knowledgeable theatergoer rather than the novice in search of an introduction.  Equally, it required a heightened skill in direction and performance.  This production finds an ideal director and cast in Randy Foster and four fine local actors, Lee Bridges, Todd Humphrey, Angela Dickson and Christine Lee.  Each assumes several roles with admirable expertise........

Christine was in many of the Theatre AUM productions while in college and afterwards, and these are listed below, along with her roles.

Productions in which she participated after graduation from AUM:

Lend Me a Tenor - Julia
Prelude to a Kiss  - Rita
All in the Timing:
The Universal Language - Dawn
Philip Glass Buys a Loaf of Bread - Woman #2
The Philadelphia - Waitress