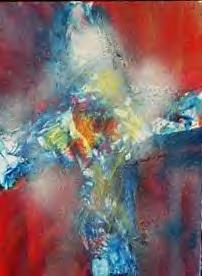 After participating in several workshops conducted by nationally known artists who encouraged experimentation with art materials and techniques, and upon recognizing the infinite possibilities it afforded, Nanette became an advocate of this relatively new and increasingly popular approach to painting. Although Nanette considers herself to be primarily self-taught, she has taken workshops with nationally known artists Al Brouilette, Carole Barnes, Carrie Burns Brown, Pat San Souci, Mary Todd Beam, Miles Batt and Ted Minchin. She has studied extensively on her own, using art instruction books and art magazines as inspiration and motivation toward experimentation with various water media materials and techniques.

*Juried into the 1993, 1994, 2000 and 2001 National Exhibitions of the Watercolor Society of Alabama, and won a Purchase Award two of those times and a Merchandise Award. She is a Signature Member of this organization.

*Juried into the Red River Watercolor Society National Exhibition (Fargo, North Dakota) and won a Grumbacher Award, and the painting was purchased by a collector.

*Juried into five Alabama Members Showcase Exhibitions sponsored by the Watercolor Society of Alabama and won an award three of those times.

*Juried into a Tallahassee Watercolor Society Exhibition and the painting was purchased by a collector.

*Won Best of Class in Abstract Art at the Alabama State Fair two years in succession.

*Founded the Experimental Artists of Alabama and serves as the Executive Director. This group has an annual Juried exhibition at the Art Gallery at the Leslie S. Wright Art Center of Samford University in Homewood, Alabama. Some of the members of this organization have been Juried into exhibitions sponsored by the International Society of Experimental Artists.

*Teaches classes in experimental art; conducts workshops in experimental painting and  in collage, demonstrates various experimental techniques for local art organizations.
See more of Nanette's work on her website.  She may be contacted at (click here)