Donna's Gallery
Back to Favorite Artists 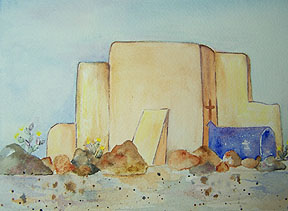 Donna Wood was born and grew up in Holliston, Massachusetts.  She spent her summers going to a YWCA camp, and enjoyed swimming, sailing and golf.  She always enjoyed working with young children, so she pursued a degree in Elementary Education at the University of Massachusetts, Amherst campus.  One summer job between her sophomore and junior year took her to Camp Wono in Brewster, MA, where she taught swimming and arts & crafts.
After teaching first grade for a year, she was married in 1972.  She and her husband, Ed, now have two grown children.  She stayed at home with both of them until they were in school full days and then went back to teaching.  The growing years with the kids took them to Cumberland, Rhode Island; Vac, Hungary; Muskogee, Oklahoma; Vienna, West Virginia, and every summer back to their cottage on Province Lake in New Hampshire.
While teaching kindergarten in West Virginia, she became involved with the West Virginia Early Childhood Association.  Ultimately, she was elected to represent West Virginia in the Southern Early Childhood Association.  As a teacher, she was interested in bringing the arts into her classroom.  Many local artists did demos on painting still lifes and sculpting.  She, also, was a docent for a small gallery in Parkersburg, West Virginia.
When her husband took early retirement, they decided to spend 6 months in New Mexico and 6 months in New Hampshire.  She pursued her love of art and signed up for a watercolor class.  Now she paints with two groups of artists in Las Cruces, New Mexico, the Essentialists and the Teacup Garden Artists.  Her summers are spent in New Hampshire.


In the Summer of 2004 while in New Hampshire, she met Fay Lee and they began painting together in a room at their church.  They became friends and have been painting together since that time whenever she is in NH.  It was decided that one afternoon each week wasn't enough painting time, or visiting time, so in 2007, they increased their painting time to 2 afternoons each week.  They work well together, critiquing each other's work and giving positive suggestions and encouragement.  Donna may be contacted at (click here to email)


Donna's Gallery
Back to Favorite Artists
Back to Art By Fay