The W.S. Neal High School, Class of 1958, held its 50th class reunion in September of 2008 on Homecoming Weekend in East Brewton, AL.  There was a dinner on Thursday night which was enjoyed by everyone, as well as decorating the parade float.  Good company, good food.  The class attended the alumni meeting on Friday morning and then participated in the Homecoming parade on Friday afternoon.  That night, there was a dinner where a good time was had by all, with much visiting, renewing of friendships, retelling of stories and good eating!  These photos were taken during the dinners, after the dinners, during the meeting, and during the parade.  Did anyone attend the game? 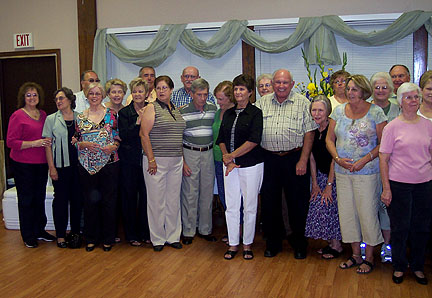 
Where did you go to Elementary and Junior High?
More Photos from Thursday and Friday
In Memoriam

Back to Art By Fay