Since moving here the end of September 2002, we have gone through several changes in our landscape.  We had a lovely Fall season with wonderfully colored leaves and brisk weather, and in October, we had our first snowfall.  It was only an inch but a week or so later, we had more.  We are told that it is very unusual to have snow that early in the year and that we will probably have a harsh Winter.  Since then we have had snow off and on, with a total accumulation of over 50 inches.  These are photos of our house and some of our property with our blanket of white, and were taken the day after Christmas. 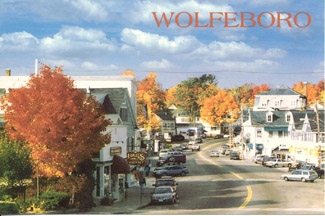 This is Main Street in the town which is nearest to where we live, with some indication as to how lovely the trees are in Autumn. 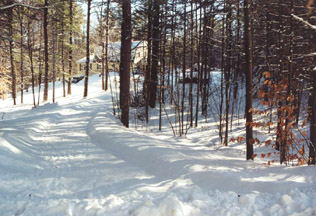 Just wanted you to see the length of the driveway and the dip it has.  A view from the road.  The driveway is even longer when it has snow on it! 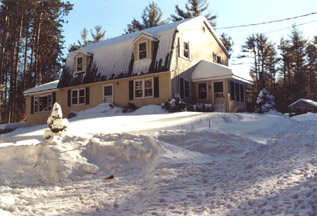 House with snow.  The snow on the roof gets too heavy and falls onto the ground.  At present the snow is building up around the house. 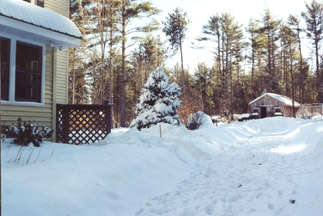 A view from the side porch into the back yard.  The "mini barn" at the back is a potting shed but at present is being used for the dogs.  Their house is inside this house, along with food and water.  A kennel is being built to the right of this building. 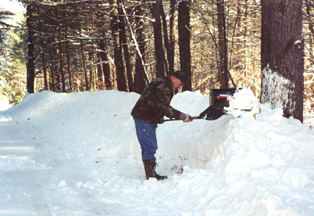 How can I say more about this photo?  The mail cannot be delivered until the area around the mailbox is cleared.  We didn't know this until the day after we cleared it and the notice was placed in the box. 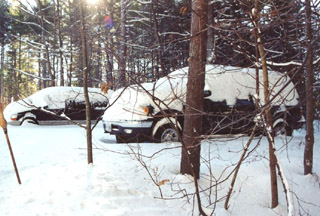 Our vehicles covered with snow.  When the driveway is plowed, the snow is piled on each side, which means that it is in front of the vehicles, and we have to clear out the snow in order to be able to go anywhere. 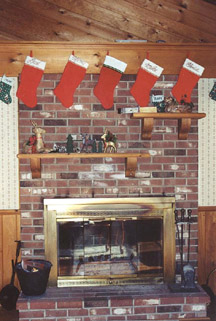 And the stockings were hung on the chimney with care! 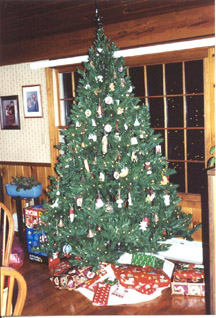 The tree is just waiting for the big day to arrive. 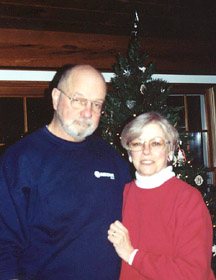 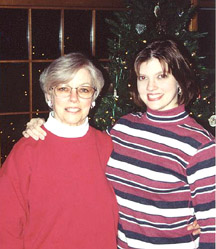 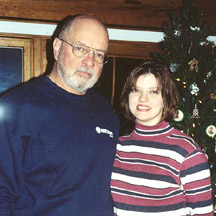